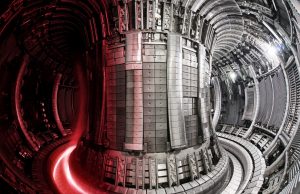 Record results announced today are the clearest demonstration worldwide of the potential for fusion energy to deliver safe and sustainable low-carbon energy.

Researchers from the EUROfusion consortium – 4,800 experts, students and staff from across Europe, co-funded by the European Commission – more than doubled previous records achieved in 1997 at the UK Atomic Energy Authority (UKAEA) site in Oxford using the same fuel mixture to be used by commercial fusion energy powerplants.

Fifty-nine megajoules of sustained fusion energy was demonstrated by scientists and engineers working on the Joint European Torus (JET), the largest and most powerful operational tokamak machine in the world.

The record and scientific data from these crucial experiments are a major boost for ITER, the larger and more advanced version of JET. ITER is a fusion research mega-project supported by seven members – China, the European Union, India, Japan, Korea, Russia and the USA – based in the south of France, to further demonstrate the scientific and technological feasibility of fusion energy.

As pressures mount to address the effects of climate change through decarbonising energy production, this success is a major step forward on fusion’s roadmap as a safe, efficient, low carbon means of tackling the global energy crisis.

“These milestone results are testament to the UK’s role as a global leader in fusion energy research. They are evidence that the ground-breaking research and innovation being done here in the UK, and via collaboration with our partners across Europe, is making fusion power a reality.

“Our Industrial Strategy for Fusion is intended to ensure the UK continues to lead the world on the commercial roll-out of this transformational technology, with the potential to deliver clean energy for generations to come.”

“These landmark results have taken us a huge step closer to conquering one of the biggest scientific and engineering challenges of them all. It is reward for over 20 years of research and experiments with our partners from across Europe.

“It’s clear we must make significant changes to address the effects of climate change, and fusion offers so much potential. We’re building the knowledge and developing the new technology required to deliver a low carbon, sustainable source of baseload energy that helps protect the planet for future generations. Our world needs fusion energy.”

“This achievement is the result of years-long preparation by the EUROfusion team of researchers across Europe. The record, and more importantly the things we’ve learned about fusion under these conditions and how it fully confirms our predictions, show that we are on the right path to a future world of fusion energy. If we can maintain fusion for five seconds, we can do it for five minutes and then five hours as we scale up our operations in future machines.

“This is a big moment for every one of us and the entire fusion community. Crucially, the operational experience we’ve gained under realistic conditions gives us great confidence for the next stage of experiments at ITER and Europe’s demonstration power plant EU DEMO, which is being designed to put electricity on the grid.”

“A sustained pulse of deuterium-tritium fusion at this power level – nearly industrial scale – delivers a resounding confirmation to all of those involved in the global fusion quest. For the ITER Project, the JET results are a strong confidence builder that we are on the right track as we move forward toward demonstrating full fusion power.”

Fusion, the process that powers stars like our sun, promises a near-limitless green electricity source for the long term, using small amounts of fuel that can be sourced worldwide from inexpensive materials. The fusion process brings together atoms of light elements like hydrogen at high temperatures to form helium and release tremendous energy as heat. Fusion is inherently safe in that it cannot start a run-away process.

JET – where temperatures 10 times hotter than the centre of the sun are reached – is a vital test bed for ITER, one of the biggest collaborative science projects in history. The larger French-based project and future power plants plan to use the same deuterium-tritium (D-T) fuel mix and operate under similar conditions to the record-breaking EUROfusion experiments held recently at Culham Science Centre, Oxford.

In its recent record-breaking experiment, JET produced a total of 59 Megajoules of heat energy from fusion over a five second period (the duration of the fusion experiment). During this experiment, JET averaged a fusion power (i.e., energy per second) of around 11 Megawatts (Megajoules per second).

The previous energy record from a fusion experiment, achieved by JET in 1997, was 22 megajoules of heat energy. The peak power of 16MW achieved briefly in 1997 has not been surpassed in recent experiments, as the focus has been on sustained fusion power.