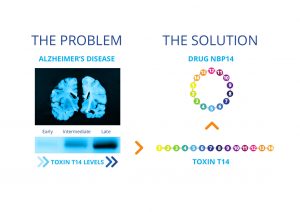 Neuro-Bio Ltd, a biotechnology company developing a first-in-class treatment for neurodegenerative disease, finds its new drug candidate effectively treats the signs of neurodegeneration in a mouse model of Alzheimer’s disease. Neuro-Bio Ltd have been based at Culham Science Centre since 2014.

Intranasal treatment for 6 weeks resulted in a marked decrease of brain amyloid and, after 14 weeks, improved cognitive performance comparable to that of normal mice. The results underscore the effectiveness of Neuro-Bio’s drug candidate and represent a remarkable step forward towards the treatment of Alzheimer’s disease in humans.

“By using basic neuroscientific knowledge we have identified what we believe is an underlying mechanism driving Alzheimer’s disease in the brain, and have developed a molecule (NBP14) to combat it. Our recent efficacy study in mouse models further validates previous work describing an erstwhile unidentified process in neurodegeneration and offers very exciting prospects for treating the disease in humans. This research should help position the drug intercepting this process, NBP14, for human clinical trials and hopefully create an entirely new era of Alzheimer’s therapeutics.”

“The results consistently indicate that NBP14 might interfere with the neurotoxic process that leads to neuronal degeneration in Alzheimer’s. This work has very exciting implications for treating Alzheimer’s because it is based on a strong scientific theory that hasn’t yet been applied to treatment of the disease.”

The UK regulator, the Medicines & Healthcare Products Regulatory Agency, has accredited NBP14 with one of their first ‘Innovation Passports’ as part of a new licensing pathway that aims to reduce the time to market for innovative medicines.

For more information and the full press release click here