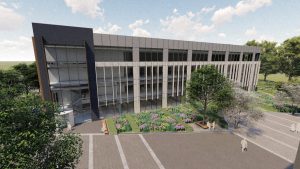 A fresh wave of innovative companies will be moving into Culham Science Centre after the UK Atomic Energy Authority (UKAEA) signed a new agreement to build an 8,000 square metre research and development building.

A 35-year income strip forward funding agreement with Legal & General was agreed this month, with the £40 million building comprising engineering and office space due to be completed in mid-2024. Planning permission has been granted and the work will be carried out by Kier construction.

It is the latest boost for the evolving South Oxfordshire campus and forms part of a major regeneration programme. It will facilitate growth and deliver economic gains while helping to solve complex and critical challenges across a range of sectors.

In June 2021, UKAEA and General Fusion announced the Canadian firm would build its Fusion Demonstration Plant at Culham Science Centre. In addition, further upgrades are taking place across the UKAEA site to advance fusion energy and adjacent technologies, including robotics, computing and artificial intelligence. Applications for these technologies are expected in a range of fields, including space exploration, mining, healthcare, and transport.

“We believe fusion could be part of the world’s future energy mix, and are working with a wide range of science, engineering, and technology companies at our Culham Science Centre to achieve it.

“Our work here continues to create jobs and drive economic growth, while helping place the UK at the forefront of the international scientific community. This new investment into Culham Science Centre will help support companies contributing to the UK’s world-recognised fusion technology cluster, while developing a supply chain and skills base required to solve challenges across a much broader range of sectors.”

“In line with Legal & General’s commitment to drive science and technology growth across regional cities, we are delighted to work with UKAEA and bolster our investment into the Oxfordshire region.

“Today’s announcement follows Legal & General’s existing £4bn partnership with the University of Oxford, where we are meeting our long-term pension commitments through creating real assets to provide new housing and innovation facilities, which in turn, boosts productivity, retains talent, and creates new jobs. It’s clear that meaningful partnerships between the public and private sector have never been more important in successfully supporting our towns and cities.”

Owned and managed by UKAEA, Culham Science Centre combines world class publicly funded research into fusion with commercial organisations, including the Culham Innovation Centre, to create a powerhouse of high technology innovation and enterprise. It is home to the record-breaking Joint European Torus, the most powerful operating fusion machine in the world, as well as Oxfordshire Advanced Skills apprentice centre and leading robotics facility, Remote Applications in Challenging Environments (RACE). Other private tenants include Reaction Engines and EnerSys ABSL.

The new four-storey office building will include a rig hall for research and development and multi-storey carpark. It will be designed to BREEAM ‘Excellent’ standard as part of UKAEA’s long-term sustainability goals, as announced this week, and capable of multi-tenant occupancy. Antonia added:

“The development of public and private partnerships is of huge benefit to our mission to lead the delivery of sustainable fusion energy. We’ve had strong interest in the new building, which will be versatile and support the growth of innovative companies aligned to UKAEA’s own aims.”

Fusion energy has great potential to deliver safe, sustainable, low carbon energy for generations to come. It has been described as the ultimate energy source, based on the same processes that power the sun and stars.

By the end of 2021 the global private fusion sector had raised over $4bn in private investment, with $2bn of this increase coming in the previous 12 months. UKAEA was advised by JLL and Burgess Salmon for the new funding agreement.