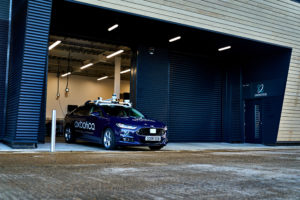 Europe’s leading self-driving vehicle software company is the first business to move into Culham Science Centre’s connected and autonomous vehicle (CAV) building, Pit Lane, as it looks to scale-up the release of its software for use across multiple industries.

The company has signed a 10-year lease for one of Pit Lane’s bespoke workspaces with offices above (totalling 2,377 sq. ft.) to provide Oxbotica’s engineers with the opportunity to work on vehicles in the garage whilst also analysing huge quantities of data generated from the vehicles.

Oxbotica has already formed a strategic alliance with the UK Atomic Energy Authority, owner of Culham Science Centre, having worked together on the DRIVEN consortium, using the site’s 10km of private road networks to test autonomous passenger vehicles, ensuring they could safely navigate complex, urban environments ahead of the recent week-long demonstration in East London.

Ozgur Tohumcu, CEO, Oxbotica, said: “Working on-road, off-road, down mines, in warehouses, around runways and across the world, we strongly believe that the world will be transformed beyond recognition by autonomous vehicles, and we are confident that our Universal Autonomy software is engineered to drive this change – working to make roads safer, environments cleaner, industries more efficient and the world that little bit more accessible.”

Lizzie Wells, Facilities Manager, Oxbotica, said: “We first set up a workshop at the Culham Science Centre back in 2016 and over the years have benefited greatly from the innovate culture of the site and private road network access for both our on-road and off-road trials. It was therefore important for us to maintain access to these benefits as we began looking for a larger premise, and the new Pit Lane offices offered us just that.”

Culham Science Centre unveiled its Pit Lane building last October with an event designed to cultivate the growing cluster of dynamic companies based in Oxfordshire who are spearheading the UK’s development of self-driving vehicles.

Garry Staunton, Lead Technologist for RACE, the UKAEA facility that specialises in robotics and autonomous vehicles, said: “We are delighted that Oxbotica continues to recognise the benefits of Culham Science Centre for the testing of self-driving vehicles. We are committed to developing the site to ensure the test facility we have here in Oxfordshire stays ahead of the game, providing those specialising in self-driving vehicles and other robotic technologies, with world-leading facilities.”

With 10km of varied and mixed private roads as well as more than 2,000 people on site, Culham Science Centre offers a unique environment for controlled testing of self-driving vehicles before they venture out onto public roads.

The Pit Lane facility enables Culham Science Centre to scale-up its operations in addition to increasing the range of work it can host.