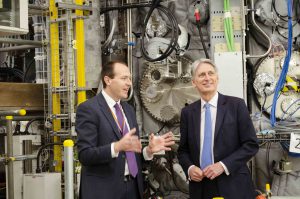 After first visiting the site’s largest tenant, Reaction Engines Ltd., the Chancellor was shown the MAST Upgrade fusion experiment – which when switched on later this year will investigate a more compact, efficient route to future fusion power stations and tackle the challenge of heat exhaust from future reactors.
He also took the chance to see the cutting-edge robotic work being undertaken at UKAEA’s Remote Applications in Challenging Environments (RACE) centre – which is working closely with UK industry to design remote maintenance systems for future powerplants.

“It was a pleasure to show the Chancellor around UKAEA’s ground breaking facilities and explain our ambition to remain genuine world leaders in this transformative energy technology. Alongside other carbon free energy sources, fusion has a huge role to play in the future as we move away from burning fossil fuels and create clean and sustainable sources of energy.”