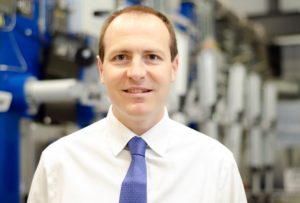 Professor Ian Chapman has been reappointed to lead the UK Atomic Energy Authority (UKAEA) as its CEO for a second term of office, following four highly successful years deepening its scientific capabilities, its technological collaboration with industry and its international reputation.

This comes at a time of significant growth for the organisation, which is managing multiple ground-breaking experiments and new programmes.

Ian Chapman will continue to lead the UK’s magnetic confinement fusion research programme at Culham. This includes running the world’s most powerful operational fusion research machine, the Joint European Torus (JET), on behalf of the EU, and a programme of experiments on the recently-completed MAST Upgrade device. He is determined to push ahead with UKAEA’s many ambitious goals:

“I am delighted to be given the opportunity to lead UKAEA through exciting changes over the next few years,” Ian Chapman said. “As we strive to tackle climate change and at the same time deliver benefits to the UK economy, our fusion energy mission is more vital than ever.

“Next year, JET will conduct unique high power fusion experiments that cannot be done anywhere else in the world, whilst MAST Upgrade will explore new solutions to exhaust extreme heat from fusion devices. Our programmes in materials, robotics, tritium and fusion technology will continue to expand and help UK industry to thrive. Finally, through the STEP programme, we have an audacious goal to deliver a demonstration fusion power plant – something I truly believe will change the world.”

Ian Chapman joined UKAEA after receiving his MSc in Mathematics and Physics from Durham University in 2004, before completing a PhD in plasma physics from Imperial College London in 2008 – rising to become UKAEA’s Head of Tokamak Science in 2014. His research has been recognised with a number of international awards, including the Institute of Physics Paterson Medal in 2013, the American Physical Society Thomas H. Stix Award in 2017 and the Royal Society Kavli Medal in 2019. He chairs the IAEA Fusion Research Committee.

“Under Ian Chapman’s leadership, UKAEA has grown rapidly in ambition and capability, putting in place a bold new programme to deliver the world’s first commercially viable fusion power plant. I am delighted at his reappointment and am sure he will continue to drive UK leadership in the world of fusion energy research.”

Professor Chapman will be supported in his role by four new Non-executive Directors: Lady Eithne Birt, Stephen Barter, Dr. Luc Bardin and Mark Bayley. All bring wide experience and expertise from across the public and private sectors to the Board, in particular in property and real estate; financing and strategic partnerships with the private and public sectors. They will join the four existing non-executive Board members – Sir Adrian Smith, Shrin Honap, Sue Scane and Chris Theobald.

Chair of the UKAEA Board, Professor David Gann, said:

“Ian’s vision and leadership over the last four years has laid the foundations for an incredibly exciting period in UKAEA’s history. UKAEA leads the world in fusion science and technology and we can look forward with confidence to next year’s key experiments on JET, the first operations on MAST Upgrade and the construction of the Hydrogen 3 Advanced Technology (H3AT) tritium facility.

“The next four years will be transformative, with new Fusion Testing facilities in Rotherham and completion of concept design for the world’s first fusion reactor to put power on the grid. I am delighted that we will continue to benefit from Ian’s outstanding leadership and the opportunity this brings to make the UK the best place anywhere to develop fusion energy.”