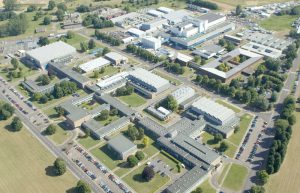 Culham Science Centre, home to 1,500 highly skilled scientists and innovators, has been granted permission to expand by Science Minister Sam Gyimah. The expansion is needed now that the successful campus site is full. The move will create space for more hi-tech businesses, working in fusion technology and related fields, bringing an estimated 200 new jobs to the area the site is already home to world-leading science projects, including the European JET fusion experiment – the hottest place in the solar system

A leading science hub has been granted permission to expand so more hi-tech businesses can call its Oxfordshire site home. In a visit to Culham Science Centre, Science Minister Sam Gyimah announced that the UK Atomic Energy Authority (UKAEA) would be able to expand the site to create new facilities for companies working in fusion-related fields. The centre already hosts around 60 companies, including 20 start-ups, employing around 1,500 highly skilled science and engineering specialists.

From fusion energy, to software for driverless cars, to air-breathing rocket engines, this site is engineering some of the most exciting science in the world.
The UK is an innovation powerhouse and with science and tech experts moving here, thriving here and growing their businesses here, it’s a vote of confidence in UK science industry. We are committed to attracting and retaining both homegrown and international talent and will keep supporting international collaboration as we tackle the grand challenges of tomorrow and build a Britain fit for the future.

The minister’s announcement is excellent news and means we can begin to establish Culham as a home for hi-tech business in fusion and adjacent sectors and reinforce Oxfordshire’s status as a powerhouse of innovation.

The visit was also an opportunity to show the Minister how UKAEA’s new research facilities will help to get fusion energy on the grid. Fusion could be the ultimate low-carbon energy source, but commercialising it entails overcoming challenges in physics, materials science, engineering and robotics. Recent government support is enabling Culham and the UK to be right at the centre of this world-changing technology.
Addressing staff during the visit, Minister Gyimah also announced:

a new academic partnership with the US to make the most of transatlantic research talent and international collaboration – the £3.6 million 3-year scheme will see an exchange programme for post-doctoral researchers from UKAEA to undertake extended visits to Princeton Plasma Physics Laboratory to work on key areas of common interest in fusion science new government funding to extend the UKAEA materials research facility – the facility tests materials that can withstand high energy neutrons from the fusion reaction; critical to the economic viability of both nuclear fission and future fusion power stations