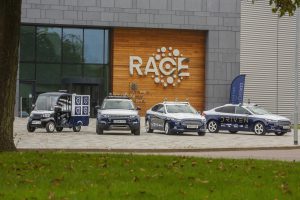 The UK Atomic Energy Authority (UKAEA) has welcomed the £14 million investment in autonomous vehicle company Oxbotica, which uses its Culham Science Centre site as a testing base.

Oxbotica this week announced the investment, which it will use to accelerate its growth as it develops the software behind autonomous systems in sectors including aerospace, automotive, construction, logistics and mining.

Founded in 2014 on research from Oxford University’s Robotics Institute, Oxbotica’s software uses the latest in computer vision, machine learning and artificial intelligence to enable vehicles to operate autonomously in any environment and on any terrain. This has made it an attractive solution for many enterprises looking to increase efficiency, productivity and safety.

Oxbotica has a base at UKAEA’s RACE (Remote Applications in Challenging Environments) at Culham Science Centre near Abingdon, and uses the 10km of private road network to carry out much of its vehicle testing.

“Congratulations to Oxbotica on this significant step towards reaching its potential. RACE is pleased to support the Oxbotica team and provide the environment for their growth. It is another success story for Culham Science Centre and for the wider Science Vale region, which has an incredible concentration of high-quality research and innovation. Oxbotica’s technology is helping to revolutionise the world of transport and it’s starting right here in south Oxfordshire.”

The Oxbotica funding announcement can be found at: https://www.oxbotica.ai/oxbotica-raises-14m-to-accelerate-deployment-of-self-driving-vehicles/