Interview with Professor Susan Greenfield of Neuro-Bio by UKAEA

Interview with Professor Susan Greenfield of Neuro-Bio by UKAEA 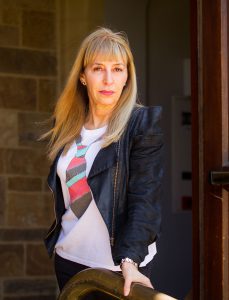 As well as UKAEA, Culham Science Centre hosts a range of leading scientific companies. One of these is Neuro-Bio, a biotech company with a focus on neurogenerative disease. Scientist, writer and broadcaster Baroness Professor Susan Greenfield (pictured) is CEO of Neuro-Bio, which she founded in 2013. Richard, from the UKAEA communications team, spoke to Susan to find out more about the company’s work. Much of the focus for large companies researching neurodegenerative diseases like Alzheimer’s focuses on alleviating symptoms, with little on halting the progression of it at onset. It’s refreshing then to see a different approach to this being taken by Neuro-Bio – a Culham Science Centre based company since 2014. Led by Susan, the company wants to succeed where others have failed in providing an effective cure for the disease.” Susan said:

“I believe the reason why a cure for Alzheimer’s has not yet been found is because we are closing the door after the horse has bolted. The concern with focusing only on the cognitive problems associated with the disease is that someone’s memory only starts to significantly deteriorate 10 or 20 years after the initial degeneration has started. It’s possible you might not know you have Alzheimer’s until 20 years after it first developed.”

Neuro-Bio emerged as a spin-off of Oxford University in 2013. Recently it has been granted its first patent for research into how to inhibit the development of Alzheimer’s, with seven more now filed. It was while a Lincoln College fellow and university academic that Susan says she first began to believe Neuro Bio could offer a significant solution in this area of drugs discovery. The company – which was initially based at Milton Park – grew off the back of significant international investment and moved to the F5 building at Culham in 2014. Earlier this year, around 80 people attended the formal opening of the major refurbishment of their facilities.

“My theory has always been that if you are in exciting and stimulating spaces, then you will think in an exciting and stimulating way. And this will lead to good science. Our approach is very different to other researchers; it’s a bit like a jigsaw puzzle, the more pieces you put together the faster you seem to be able to go. The long-term goal of this granted patent is to discover the means to diagnose and treat Alzheimer’s following a routine blood test. Our dual approach will see the development of medication designed to prevent further brain cells dying.”

And it could be revolutionary

“This is the dream for us. If an Alzheimer’s patient took this medication after a blood test, then even if you had no symptoms of the illness, the drug itself would prevent the symptoms from developing. It could be life-changing, and it’s fascinating to work on. One of the keys to further development of their research, is to establish the basic reason why specific cells die off in the brain”

“There are other research approaches being taken which believe brain cells are all generic, and that they all work the same way. I’ve learnt from experience of teaching neuroscience that it basically depends where in the brain a cell is, because this then determines its general signature. These signatures then influence their vulnerability to dying.”

Currently, this dual approach sees scientists working on the development of the biomarker and others on drug discovery. This would allow the blood test to identify early onset of some Alzheimer’s or dementia – a gamechanger. The drug development would then follow.

Asked why such an approach hadn’t been taken before, Susan said:

“I think most people are naturally conservative. If you have spent a long time investing in something then you are going to be reluctant to change that. And I think that’s how it is for a lot of scientists – lots of time and effort has gone into a conventional approach and therefore there is this tendency to be reluctant to try something different. As everyone knows, drug discovery is a long process, especially with regards to the various (and appropriate) regulatory procedures.”

“In terms of when we will see our first clinical trials, I would hope that this is in the next few years. But it depends on the success of our so-called lead compound, which we think we have identified. I can’t say much more yet, but we are all hopeful this will allow us to reach this first phase relatively soon.”

Working on site for UKAEA means sometimes it’s easy not to know anything about tenant companies. So how big is Neuro-Bio in staff numbers?

“We have a great team of around 16 staff. Around two thirds of the workforce consist of scientists with the other third management. It’s a truly cosmopolitan environment too – we have an eclectic bunch of people.”

“We’re all keen coffee drinkers – Lavazza is the drink of choice.”

So as a tenant company at Culham Science Centre, what do Neuro-Bio make of UKAEA and their fellow neighbours?

“We’d like to get to know people more. I think the idea of a joint working lunch for example – or something like that – would be fantastic in that regard. Both in terms of meeting UKAEA staff and finding out more about the work of fusion. Furthermore, as a location, we like Culham Science Centre very much. It’s a great place to get to from Oxford – where many of our staff are based. Further, the site security is brilliant here. “On a lighter note we’re very keen on the new menu at the canteen!”